I was playing in the sandbox out in the yard when I was about 5 years of age. This was when my childhood home was located on old Bodenvägen (the old ‘Boden’ street), just opposite the old cinema. Nowadays the entire house has been moved and the cinema has been demolished. I was completely in my own little world when a boy of my age named Hellsten stopped by, together with his older brother. He asked, “Shall I shoot you?” “Yeah, why not.” I said. He aimed straight at me and then there was a deafening blast. 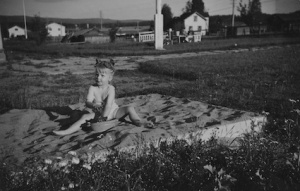 The sound of the shot echoed through the neighborhood. It was so loud that my ears hurt. I remember the smouldering of tiny woodchips where the bullet had penetrated the wooden side of the sandbox just a few inches to the right of where I was sitting.

Within no time there was an immense commotion. My parents and some visitors came rushing out of the house in an alarmed state and took the boy’s gun, uttering warnings and were extremely upset. If memory serves me right, I believe that this story might even have been published in the regional daily newspaper, Norrbottens Kuriren.

The realization that I could have died just because I ’assumed’ he was holding a toy gun was a valuable life lesson.

It is so important not to just say ‘yes’ based on assumptions, but instead make sure that it is indeed that which it looks like.

Back to “Thoughts, questions, experiences” >>